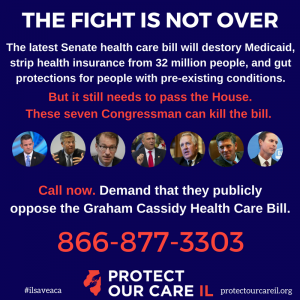 Just when we thought the Congress had moved on to bipartisan efforts to improve on the ACA and fund children’s health insurance, Sens. Graham and Cassidy introduced their new and even WORSE ACA Repeal bill. Unfortunately, this bill is gaining steam as the Senate has only until Sept. 30 to pass it with only 50 votes.

We need to fight harder than ever to stop this last ditch effort to strip millions of people of their health insurance.  In Illinois that means calling on our members of the House to publicly oppose the Graham-Cassidy proposal.

If this bill is approved in the Senate, it still needs a vote in the House. Public opposition from the House NOW could stop this bill in its tracks–yet many Members of Congress from Illinois have been silent.

We need you to call your Member of Congress today (1-866-877-3303) and tell them to publicly oppose the Graham-Cassidy bill – which could come to the House as early as next week!

The financial impact of Graham-Cassidy in Illinois is clear. An Avalere report shows that Illinois would lose $8 billion dollars for Medicaid between 2020 and 2026—money that will be given instead to states that did not expand Medicaid. When this block grant expires, Illinois will lose $10 billion in 2027 alone.

In addition, Graham-Cassidy would:

Please call your Member of Congress today (866) 877-3303 and tell them that the Graham-Cassidy bill is extremely harmful to Illinois families. Tell them you want them to return to the bipartisan talks that were finally starting in Congress to stabilize the Marketplace.

Thank you for all that you have done the past 9 months to help Protect Our Care and defeat the continuous onslaught of ACA repeal bills. YOU are the reason why we have gotten this far!

Email sign-up
Protect Our Care IL @ProtectILCare
5 months ago
👏Thank you, @GovPritzker, for uplifting the importance of Advance Premium Tax Credits in your letter to Congressional leaders. #APTCs have helped millions of people afford health insurance and are an essential piece of the health care ecosystem.

https://t.co/5TnWM4B6JS
View on Twitter
6
4
Protect Our Care IL @ProtectILCare
9 months ago
The unrolling of PHE flexibilities will pose significant challenges for people with Medicaid and agency staff. In #Illinois we hope to get ahead of the unwinding and protect continuous eligibility. Support HB4343, the Equity in #Medicaid Act today!
https://t.co/vofvGmBN1G
View on Twitter
1
3
Follow @ProtectILCare
Share Your Story!