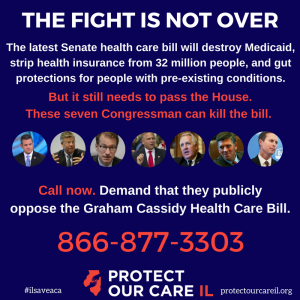 Republican leaders have not stopped trying to secure votes for the extremely dangerous Graham-Cassidy proposal. We must not stop either.

If this bill passes, nearly 1 million Illinoisans could lose their health insurance, protections for all people with pre-existing conditions could be gutted, and the state could lose billions of dollars in federal health care funding ($153 billion by 2037).

Non-action will harm millions in Illinois: Call your representative at (866) 877-3303 NOW and demand that they publicly oppose the Graham Cassidy proposal.

The Senate could vote anytime this week–even without a full CBO score to show the impact on insurance rates, with only a sham hearing in which we saw people living with disabilities forcibly removed, and in spite of the success of recent bipartisan negotiations. If they do not pass this bill by 11:59pm ET on Saturday, Sept. 30, it dies and we can all, celebrate a hard won victory. BUT NOT A MINUTE EARLIER.

You can learn more about how Graham Cassidy will hurt Illinois here.

Email sign-up
Protect Our Care IL @ProtectILCare
5 months ago
👏Thank you, @GovPritzker, for uplifting the importance of Advance Premium Tax Credits in your letter to Congressional leaders. #APTCs have helped millions of people afford health insurance and are an essential piece of the health care ecosystem.

https://t.co/5TnWM4B6JS
View on Twitter
6
4
Protect Our Care IL @ProtectILCare
9 months ago
The unrolling of PHE flexibilities will pose significant challenges for people with Medicaid and agency staff. In #Illinois we hope to get ahead of the unwinding and protect continuous eligibility. Support HB4343, the Equity in #Medicaid Act today!
https://t.co/vofvGmBN1G
View on Twitter
1
3
Follow @ProtectILCare
Share Your Story!